I’m reading The Passage of Power, the fourth book of Robert Caro’s multi-volume biography of Lyndon Johnson. The book recreates in vivid detail the years 1958 through 1964, during which Johnson wielded enormous power in the Senate, reached for the Presidency with a baffling strategy guaranteed to fail, became Vice President, and gained the Presidency in a way he never expected.

Oh, and he launched the War on Poverty and the most transformative civil rights policies since emancipation.

The story speaks to me personally

The story speaks to me personally on so many levels.

Johnson’s youth was twisted by poverty. As President, he marshaled the might of the federal government to improve poor people’s lives in a way that was bold at the time and almost inconceivable in the heartless policy environment of recent decades.

How to shift the way people imagine the possible – so that it is the persistence of poverty in America that becomes inconceivable, rather than the hope of ending it – is the driving passion of the Center for Community Change, where I’ve worked for more than 20 years. So it’s fascinating to learn how Johnson found ways to advance so dramatically both civil rights and anti-poverty efforts.

I also have a family connection to the book. Both my parents were political activists who volunteered for the Kennedy campaign.

My father attended the 1960 convention that is the highlight of the book’s opening chapters, and took the photos you see here. As a child, I got to accompany my mother to the Kennedy campaign headquarters in Chicago, where I was allowed to stamp the return address on stacks of envelopes.

If you’ve read any of my previous blog posts, you might be thinking, “Well, at least she isn’t talking about her new novel.”

One element of LBJ’s legacy is, of course, his disastrous leadership of the war in Vietnam. And that war – specifically its lifelong impact on one woman who served – is the focus of my novel, Her Own Vietnam.

See how neatly I have twisted Caro’s award-winning masterpiece so it’s all about me?

You may well wonder what I know about the Vietnam War and its afterlife. More on that later.

Meanwhile, enjoy these photos of the past. 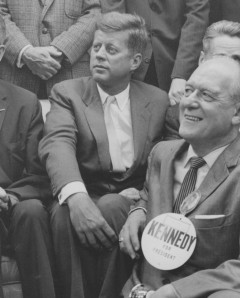 Candidate JFK at 1960 Democratic convention. Notice how big the campaign buttons are and how small the chairs.
Photo by Julian P. Kanter.

4 thoughts on “Roots of the War on Poverty”