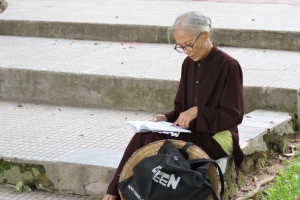 They say the first line of a novel is supposed to tell you all you need to know about the book and the reading experience ahead of you. (Is that true? Beats me. You know how they are always going around saying things.)

But it did make me think. And what I thought was: Let’s have a contest!

I’ll list the first line of ten novels I loved. Let’s see how many of the novels you can identify based only on the first line. Of course, you could simply google the lines and figure out all ten, but where’s the fun in that?

The first person who correctly identifies the most titles will win a copy of Egg Heaven, a collection of gorgeous short stories by the award-winning writer Robin Parks. It’s the first book that will be published by Shade Mountain Press, which a month later will publish my novel. Egg Heaven will be available in October; you can preview it here.

1. “Ships at a distance have every man’s wish onboard.”

2. “They shoot the white girl first.”

3. “It began the usual way, in the bathroom of the Lassimo Hotel.”

4. “That night when he came to claim her, he stood on the short lawn before her house, his knees bent, his fists driven into his thighs, and bellowed her name with such passion that even the friends who surrounded him, who had come to support him, to drag her from the house, to murder her family if they had to, let the chains the carried go limp in their hands.”

6. “Princeton, in the summer, smelled of nothing, and although Ifemelu liked the tranquil greenness of the many trees, the clean streets and stately homes, the delicately overpriced shops, and the quiet, abiding air of earned grace, it was this, the lack of a smell, that most appealed to her, perhaps because the other American cities she knew well had all smelled distinctly.”

9. “We slept in what had once been the gymnasium.”

10. “It is a truth universally acknowledged, that a single man in possession of a good fortune, must be in want of a wife.”

These are all women writers.

4 thoughts on “The first line”