Each year, I share a list with brief descriptions of the books I read that year. In 2014, the book I read and re-read the most was my novel Her Own Vietnam, as I prepared it for publication. But that still left time to read 45 other books – some of which might be just right for you.

Books are listed in alphabetical order by title. An asterisk (*) indicates a book I particularly enjoyed. I’ll post the list in three parts:

I hope you’ll find some good choices for your own reading in 2015. Feel free to share this list with other book-loving friends.

The Man in the Wooden Hat by Jane Gardarm

This is the second book in the “Old Filth” trilogy. (Filth is an acronym for “Failed In London; Try Hong Kong.”) The novel focuses on Elizabeth Feathers, an adventurous young Englishwoman who grew up in the East and spent much of WWII in a Japanese internment camp. She meets and marries Eddie Feathers, a rising attorney who is too conventional for bold Betty. They meet in Hong Kong and stay married for decades, finally retiring in old age to a Britain that feels alien to them. Betty Feathers is a vivid character, drawn with verve and wit by the author. A very enjoyable read.

Every decade or so I reread this stunning novel, and each time I find something new to appreciate. The novel takes place in London, during a single June day in 1923. World War I is over, but its impact can be felt everywhere. Clarissa Dalloway, an upper class woman in her 50s, is preparing to throw a party. Peter Walsh, who once loved her and whom she rejected for the more predictable Richard Dalloway, has just returned to London after five years in India. A veteran is going mad in a way that makes perfect sense after the horrors of the war, and his immigrant wife is growing desperate. All of these people and more connect and intertwine and pull apart in unexpected ways as Clarissa Dalloway’s past and present collide.

A sad and strange novel about a man whose wife has been murdered yet continues to hold long conversations with him almost nightly on a remote beach in Nova Scotia. Like the ocean, the novel is animated by undercurrents – the lure of the past, literary and cinematic allusions, therapy, “situational ethics” – that at different points both muddy and clarify this story of grief and determination.

*The Paying Guests by Sarah Waters

In the years after the first World War, a young woman (Frances) and her mother are forced to rent rooms in their large house in suburban London to lodgers. They need the money and have room to spare: both of Frances’ brothers were killed in the war, and her father soon died, leaving them penniless. The married couple who move in are politely known as paying guests. Sharing a home is fraught enough, but then Frances and the wife fall in love. A domestic drama evolves into a murder and a trial at which not only a defendant but ideas of class, gender, loyalty and duty are under interrogation. The novel is gripping and suspenseful, and does a brilliant job of conveying in crisp human detail what it was like to live at that time, under those constraints. I particularly enjoyed the details about early 20th century housekeeping.

These fine stories peel back the skin to show the pumping blood behind the wars in Iraq and Afghanistan, as experienced by combat soldiers, administrative staff, ministers, chaplains and more.

The Signature of All Things by Elizabeth Gilbert

Who knew Elizabeth Gilbert could write like this? The sweeping novel follows the Whittaker family – particularly Alma, the brilliant and singular botanist – through centuries and continents as she seeks the coded messages God sent to humankind through the secrets of evolution. An enjoyable romp of a book, shot through with ideas and curiosity.

The Snow Child by Eowyn Ivey

A middle-aged couple, devastated by their inability to have children, decides to move to Alaska. One night they build a snowman in the shape of a young girl, and the next day they see the girl running through the forest. I am weirdly drawn to stories that take place in cold locales, so I particularly enjoyed the details of what it’s like to work a farm in Alaska. The novel offers compelling characterizations of the couple and their neighbors.

The fact that sociopaths have become such stock figures in popular culture may be due in part to Patricia Highsmith. This brilliant novel is about a young man who has all the yearning, striving and desire of other men – everything but a conscience. He kills the man whose love he was trying to win, and begins to live the victim’s life. Written in flat, simple, ice-cold language, the novel brings you deeply inside the terrifying Mr. Ripley and compels you to understand his drives and motivations.

Talking to the Dead by Helen Dunmore

A moody, intimate novel about the bonds between two sisters and the childhood secret they’ve kept for decades – even from themselves.

The Testament of Mary by Colm Toibin

A brief, beautiful novel about Mary, the mother of Jesus, who looks back on her life in the months following her son’s death, as her own death approaches. She never believed he was divine; considered his followers “misfits” and “men who couldn’t look a woman in the eye;” and despite the apostles’ conviction that her son’s horrific death will change the world, Mary cannot believe the sacrifice could possibly be worth it. I found this simple, powerful book very moving.

*To the Lighthouse by Virginia Woolf

This is one of my favorite novels, which I reread every so often just to appreciate the beauty and precision of the language. Woolf’s portrayal of the two main characters, Mr. and Mrs. Ramsey – whose first names we never learn – and of the tidal sweep of their relationship amidst their eight children remains powerful. The novel also contains the most shocking parenthetical phrase of any book I’ve ever read. This time around, I listened to the novel as an audiobook. Juliet Stevenson is the perfect narrator for Virginia Woolf.

The UnAmericans by Molly Antopol

Powerful short stories that explore how political events can scald human lives with the briefest touch, and what it’s like to search for or flee from a home on this turning planet.

The Unlikely Pilgrimage of Harold Frye by Rachel Joyce

A pleasant novel about a bland, repressed, middle-aged Englishman who strolls to the mailbox to drop a letter to a dying friend, but surprises himself and everyone else by instead walking across England to the friend’s bedside.

The Visionist by Rachel Urquahart

I’ve attended two high schools called Shaker High, one in Ohio and one in upstate New York, so I’ve always been curious about the Shakers. This novel pulls you inside their world during an era in the 19th century when girls were seized by visions of the divine. Another teenage girl with visions come to the Shaker village, left there by her mother as the family flees a traumatic event in their town. The newcomer is paired with a girl who grew up in the Shaker Village, and the two become close. But are the new girl’s visions glimpses of the divine or something else?

*We are all Completely Beside Ourselves by Karen Joy Fowler

Award-winning novel about what it means to be human, and to love those who are not. When the narrator was 5 years old, her twin sister was torn away from the family for reasons that may or may not have been her fault. The fact that her sister was a chimpanzee is both the point and beside the point of this excellent book.

*We Are Called to Rise by Laura McBride

Four tragic story lines narrated by four diverse characters converge into one moment of hope in a Las Vegas that tourists will never see. I particularly appreciated the sections written in the point of view of Bashkim, an 8-year-old boy. I often find child narrators annoying, either too cutesy or preternaturally wise and mature. Bashkim is unusually mature and responsible, but in the way that is typical of the children of immigrants, who must serve as their parents’ translators and protectors in their new world. The book brings the four main characters to life, with all their shortcomings and desperation, and the deep daily heroism of trying to do their best. Las Vegas, perhaps our country’s strangest city, also takes a star turn in this wonderful novel that is all about what is not visible on the surface.

A renowned architect experiences a trauma and moves from Los Angeles to Seattle, where she lives with her Microsoft-guru husband and her adored daughter in a deteriorating mansion. The architect, Bernadette, has grown agoraphobic and has hired an online assistant to take care of life’s chores. Things get tricky when the family is about to embark on a trip to Antarctica. Bernadette’s skewering of Seattle and its culture was perhaps the most entertaining part of the book. This is a quirky, satirical novel that hides its dark heart in a veneer of frothiness. 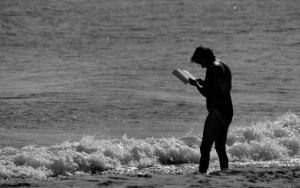