A tale of two audiobooks and a library book

I’ve been looking for a book that I could immerse myself in and forget the world. I didn’t want to have to worry about the characters, or fume at the injustices they encountered, or fear for their futures; I do enough of that with the daily news.

The Seven Husbands of Evelyn Hugo by Taylor Jenkins Reid 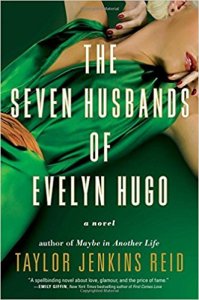 I chose this audiobook – about a vintage Hollywood superstar with a marrying habit – for two reasons. First, it’s narrated in part by my favorite voice actor, Robin Miles. (Disclosure: she also narrated the audiobook of my novel Her Own Vietnam).

Second, my thought was this: Since I have only a mild interest in Hollywood or husbands, what could be more relaxing than listening to a well-told book about, well, nothing much at all?

Boy, was I wrong.

Don’t misunderstand – the novel is thoroughly entertaining. As glamorous Evelyn Hugo, at age 79, tells her tumultuous life story to a young journalist with troubles of her own, the plot hurtles from the 1950s to today, sweeping the reader along with it.

But the book isn’t about nothing.

It’s about identity – racial identity, sexual identity, the way famous people construct a public persona to shield their private selves, and what they lose in the process. It’s about the danger of coming out in the pre- and post-Stonewall eras, and the cost of remaining closeted. Mostly it’s about what constitutes a family.

This is the perfect beach book. Don’t read it for the lapidary sentence or enduring image; read it for a rip-roaring story that takes you deeply behind the façade of glittering lives.

I gave up on forgetting, and turned to remembrance.

In 1927, writer and cultural anthropologist Zora Neale Hurston began to interview a man named Oluale Kossula but called Cudjo Lewis for most of his life. He was a Nigerian who, in 1860, had been kidnapped by fierce women warriors from the kingdom of Dahomey* and sold into slavery in Alabama.

The slave trade had been outlawed for decades by then; not slavery itself, of course, but the purchase and transport of such human “cargo.” When Hurston met him, Kossula was one of, if not the, last living person to have been seized in Africa and enslaved in America.

In 1931, Hurston first tried to publish her book about this man and his extraordinary life. It was finally released – 58 years after her death. In Barracoon, two remarkable stories intertwine: the saga of Kossula’s life, and the tale of how Hurston came to know him so well.

Hurston faithfully preserved Kossula’s idiom and recreated it phonetically. For example, “My people in Afficky, you unnerstand me, dey not rich. Dass de truth, now. I not goin’ tellee you my folks dey rich and come from high blood.”

Publishers rejected the book, largely because they thought the dialect made it too difficult to read. I can’t comment on that, because I listened to Barracoon as an audiobook, beautifully narrated by Robin Miles. (I’m not stalking her, I swear!)

Paper, ebook or audiobook, see if you can resist this opening:  “… the only man on earth who has in his heart the memory of his African home; the horrors of a slave raid; … and who has sixty-seven years of freedom in a foreign land behind him… How does one sleep with such memories beneath the pillow?… I was sent to ask.”

*(Some people have pointed out that the fabulous women warriors in the “Black Panther” movie were based on the Dahomey warriors.)

The Bullet by Mary Louise Kelly

Back to my search for oblivion, I picked up The Bullet. It’s written by a journalist I admire, NPR’s Mary Louise Kelly, who apparently writes thrillers on the side.

This book really is about nothing, in the best possible way. The twisty and fast-moving plot centers on a woman who discovers she’s carrying a bullet in her neck that she never knew about, and that throws everything she’s ever believed into question. The protagonist faces perils that are specific only to her own circumstances, not transferable to the world at large or middle-of-the-night worries.

But there is something about the book that haunted me. In order to mislead the police, a witness tells them a crime was committed by a black man wearing a ski mask. In truth, the crime was committed by a white woman, and the lie sets her free. What about the black men who will be at best harassed and questioned, and at worst arrested and convicted for this crime? The book is silent.

I don’t mention this to criticize Kelly for including this stratagem, which is seen sometimes in books and all too often in the news.  But I’m willing to bet that she, and many other white writers, will never use it again.

The Bullet was published in March 2015, which means it was written before the August night in 2014 when Mike Brown was killed by police in Ferguson, Missouri. For many white people in America, Brown’s killing and the upheaval that followed marked the moment we finally opened our eyes to the deadly violence and daily contempt that police forces have been meting out in communities of color for generations. With that new consciousness will come, I hope, new and less pernicious literary devices.

It turns out that finding forgetfulness in books is harder than I thought.

Follow Start with a Story on WordPress.com
Join 337 other subscribers