There are many more than 30 wonderful women novelists you should know. But there are only 36 days left until my novel, Her Own Vietnam, is released. So I’m using this time to talk about women storytellers, both new (to me) and vintage.

Having a Rene Denfeld moment

There was a time, not all that long ago, when I had never heard of Lana del Ray. Then suddenly her name and her music were everywhere: on the radio, on TV, playing in friends’ cars, showing up on Facebook.

I’m having that kind of a moment with Rene Denfeld. First I started seeing rapturous reviews for her novel, The Enchanted. Later I came across this powerful article by Denfeld.

One night I started to read her novel. The next morning a comment from her appeared in my Facebook feed. (Apparently we have friends in common.)

If you’ve read the beautiful, strange and stirring novel The Enchanted, you will understand how disconcerting it was to have the creator of that hallucinatory universe pop up on Facebook.

The Enchanted takes place largely in an old stone prison, inside a basement dungeon that serves as the prison’s death row. The narrator, Arden, is waiting his turn to die for a crime so horrific he will not describe it.

Even The Lady, the intrepid death row investigator who is the novel’s main character, walks a little faster when she passes his cell. Her job is to find evidence that will get a prisoner’s death sentence commuted to life in prison. But her current client, a murderer named York, is different from all the rest. He wants to die.

Not the standard ingredients

An unnamed investigator with her own troubled past, a fallen priest, a heartbroken warden, a clutch of death row inmates, and a narrator who is a condemned murderer and is certainly twisted if not mad – these are not the usual ingredients for a thing of beauty. And yet the novel is beautiful. Open the book anywhere at random, and you’ll find an idea, a description, a piece of dialogue that is fresh and lovely.

The Enchanted is not one of those novels where you turn the last page and lament the need to leave the world it created. You rejoice at your freedom to leave that “enchanted place.” But you have learned to see that world in an entirely new way. 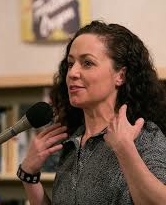