Wendy Lee’s second novel, Across a Green Ocean, starts out simple and sad. A middle-aged woman, Ling Tang, gazes out at the lawn of her suburban house, which hasn’t been mowed since her husband Han died suddenly a year ago. Like the overgrown lawn, the novel seems familiar at first, but grows more mysterious and compelling the further you explore.

Ling Tang and her husband are Chinese immigrants who raised two American children: Emily, an over-achieving immigration lawyer married to an entitled white man, and Michael, a gay man who has not yet found his footing as an adult or come out to his family. Michael is not alone; his sister and mother have secrets too, as did his father. The Tangs are saturated in secrets, straining to love one another despite realizing they don’t know each other at all.

When Michael discovers in his late father’s papers a recent letter from a Chinese friend that says, “Everything has been forgiven,” he makes an impulsive trip to China to finally learn something about his taciturn father’s past. What he discovers cracks the deep reserve that has kept his family members isolated from one another.

A ghost on the tongue

Lee does a masterful job of presenting the reader with a pivotal moment and only later revealing its meaning. We revisit certain scenes, each time seeing it from a different character’s point of view and deepening – or completely overturning – our previous understanding of the event. The book sparkles with lovely descriptions, for example a woman sipping tea until “the bitterness became a ghost on her tongue.”

But what I enjoyed most about the novel was its depiction of life in America as an immigrant and as the child of immigrants. Ling, from Taiwan, visits other immigrant households and “recognize[d] the way people displayed English magazines… on the coffee table, while the newspapers in the kitchen were in their native languages. She understood what it meant to try too hard.” Emily says her parents “were such immigrants – putting mothballs in their closets, keeping furniture covered in plastic, refusing to drink tap water unless it had been boiled, not trusting the dishwasher to get the dishes clean.”

Across a Green Ocean is a moving depiction of people dealing with exile, isolation and the cruelly broken immigration system in the U.S. – and a set of relatives struggling at long last to become a family.

The sigh of exasperation heard round the world

On the first day of 2015, the novelist Celeste Ng (Everything I Never Told You) published an article in Salon designed to “fix our Asian-American women writer blind spot” after being told by one conference organizer too many that, “There aren’t a lot of you out there.” Ng’s article provides a long but admittedly incomplete list of such writers, including Wendy Lee, whose first novel, Happy Family, was published in 2008. Dig in.

Want a free copy of Across a Green Ocean?

In February I’m giving away a copy of Across a Green Ocean, which was just released on January 27, 2015. For a chance to win this and other free books, sign up for my free monthly newsletter, Being Bookish. 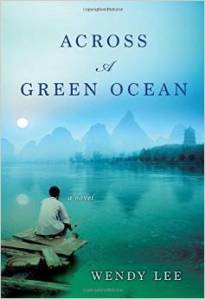